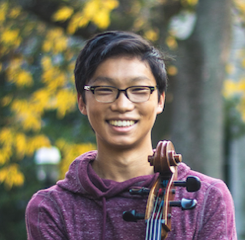 Leland Ko is a 20-year-old cellist from Weston, MA.  He was most recently a disciple of cellist, teacher, and Cleveland Quartet co-founder Paul Katz of the New England Conservatory (NEC), and is now a third-year majoring in German at Princeton University.  Prior to studying with Katz, Leland was a long-time student of Ronald Lowry.  In 2011, Leland was admitted to the Perlman Music Program (PMP) Summer Music School in New York run by Itzhak Perlman and his wife.  For six summers, Leland studied with Ronald Leonard, former principal cellist of the Los Angeles Philharmonic, as well as with Merry Peckham – among many others – who helped cultivate in Leland an intense passion for chamber music.  Now having attended PMP’s Chamber Music Workshop for the last two years, as well as Orford Musique in 2017 and Ravinia’s Steans Music Institute in 2018, Leland has had the chance to study with and occasionally perform alongside artists such as Laurence Lesser, Lluis Claret, Joel Krosnick, Natasha Brofsky, Timothy Eddy, Marcy Rosen, Ralph Kirshbaum, Itzhak Perlman, Donald Weilerstein, Vivian Weilerstein, and Peter Salaff.

From its founding in 2012 until leaving Boston, Leland was also co-principal of the Boston Philharmonic Youth Orchestra (BPYO), an orchestra that strove to create leadership as much as it created music, under the direction of Benjamin Zander.  With the orchestra, Leland has toured all across Europe – the Netherlands, the Czech Republic, Germany, Switzerland, and Spain.  Prior to the BPYO, Leland was a long-time member of the Boston Youth Symphony Orchestra (BYSO) under the direction of Federico Cortese.

Leland is also a dedicated tennis player (and even more of a dedicated tennis fan), having played competitively on the USTA circuit through much of his youth and serving as a stalwart on his high school’s team as well as the Princeton club tennis team.  In the last few years, Leland has also become a long distance runner and is slowly transitioning into triathlon, which conveniently complements his other passion for eating (and occasionally cooking) food.

Leland plays one of the many cellos made in Maine over the last few decades by Nathaniel Slobodkin, and a Swiss-made bow by Pierre-Yves Fuchs.  This is Leland’s third consecutive year being invited back to perform with FVSO and Jonathan Brennand.